Welcome to the Haven!

Please take a bit, browse around and see what we have to offer! Once you are done, we highly recommend registering with Discord so your Discord avatar syncs with the site! Any of the social logins work, but we recommend signing up with Discord!

You are using an out of date browser. It may not display this or other websites correctly.
You should upgrade or use an alternative browser.

🦕 Herbivore 🐴 Kentrosaurus - The "Primitive" Member of the Stegosauria Family

The Kentrosaurus (often shortened to Kentro) was considered a more 'primitive' member of the Stegosauria family, but it was more of a spiked form of the Stegosaurus, which used mostly plates and spikes on the tail. Originally discovered back in 1909 - 1915. Fossils were found only in the Tendaguru Formation, around 152 million years ago. Hundreds of bones were unearthed by various German expeditions to the area. No complete skeletons are known but the remains that have been found nearly complete the picture of the possible build of the animal.

Its scientific name is Kentrosaurus Aethiopicus, thankfully the name Kentro has is pretty easy to pronounce for us normal peeps! The dinosaur was named by German paleontologist Edwin Henning in 1915. The name comes from the Greek word kentron/κέντρον which means "sharp point" or "prickle" and sauros, which we know means "lizard." They added the name Aethiopicus to denote it came from the provenance of Africa. 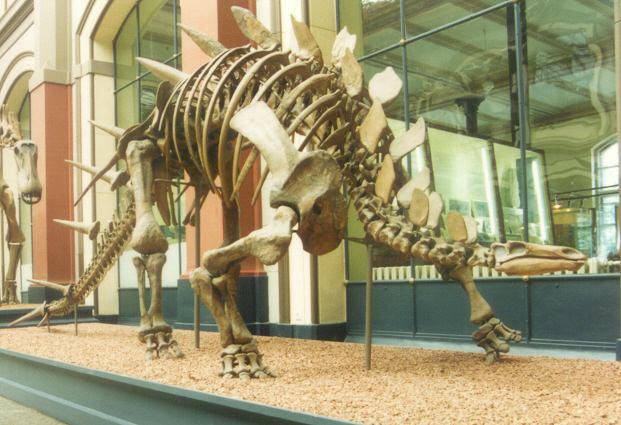 As mentioned above, the Kentro was discovered in the Africa area back in 1909-1915 by German paleontologist Edwin Henning. Materials found during the discovery include a nearly complete tail, hip, and some dorsal & limb bones. The initial find's bones are located in the Musem fur Naturkunde, by Janensch. It was dismantled in 2006 during museum renovations and remounted in an improved pose.

The picture to the left is the original pose before the 2006 renovation, and afterward, it was in a slightly different position.

There was some controversy while naming this discovery, over a name that is similar to the Ceratopsian Centrosaurus. There are some rules in biological naming, that forbid homonymy. This means two animals may not be given the same name (or in this case similar) and due to this, Henning renamed his to Kentrurosaurus meaning "Pointed-tail lizard" in 1916; while Hungarian paleontologist Franz Nopcsa renamed the genus to "Doryphorosaurus" which means "lance-bearing lizard" in the same year.

If renaming it was needed, Henning's would've had priority. However, since the spelling is different, it kept its original name of Kentrosaurus.

The Kentrosaurus was a smaller stegosaur, it had the typical dinosaurian body shape. This means it had a small head, medium-sized neck, short forelimbs, long hindlimbs, and a long, muscular tail. When Henning published his monography in 1925, on the Kentrosaurus he mentioned that only a single complete tooth was known for the Kentrosaurus. This animal can be distinguished from other members of the Stegosaur family by the number of vertebrae along its back, in which the tail does not run sub-parallel like most dinosaurs.

As is typical for most stegosaurs, the Kentrosaurus had extensive bony structures in its skin (osteoderm) covering its body & back. This includes small plates around its neck and spikes in various shapes and sizes. The spikes on the Kentro were elongated, with one having a core length of around 731 millimeters (~29 inches)! Aside from a few exceptions, most of the plates & spikes were uncertain in what position they were set in.

The Kentro was an herbivore, and due to its body shape, it was most likely a low-level browser eating grass and berries close to the ground. It most likely ate standing on all four legs, but it was possible that it may have been able to reach up on its hind legs to reach some vegetation in lower branches of trees. With its center of mass near its hind limbs, that makes it seem more likely that it was able to do so, and may have allowed a 60-degree inclination.

The differences in the proportions, not the size, of the femurs, led scientists Holly Barden & Susannah Maidment to realize that the Kentrosaurus likely showed Sexual Dimorphism. One thought that paleontologists & scientists have considered was that there was likely a higher percentage of female Kentros than males.

Due to their tail having at least 40 caudal vertebrae, the tail was likely very mobile. This meant it could possibly swing its tail in a 180-degree arc, covering a large area behind its body while defending itself or its herd. Speeds are not known for sure, but it is estimated that they may have been able to swing their tail around 50 km/h (31 MPH). These spikes and the speeds of its tail likely were able to cripple smaller to medium-sized theropods, and likely did some serious damage to larger theropods. The Allosaurus likely gave it some trouble.

The Kentro was a dangerous herbivore if you got too close to it. While it was likely peaceful when it wasn't feeling threatened, once it or a member of its pack was in danger, it would likely try to defend its packmates, even with Stegosaurs "known for their small brains."

There are no comments to display.